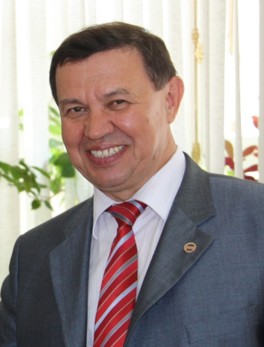 We live in a period of principal changes in Russia, making important government decisions aimed at support and development of national science. State and the academic community in these years made a number of cardinal steps to strengthen and develop basic research in the country, to increase their role in addressing the challenges facing the state.

As Confucius said, "Those who do not think about the distant difficulties will certainly have close troubles." Today it is essential to be able to look beyond the achieved horizons to find a qualitatively new ways to solve important problems. Attention to the scientific breakthrough technologies is a major step towards a truly reliable supplying all mankind with energy carriers, and ultimately towards the improvement of the life quality for present and future generations.

We all remember in what condition was science in the recent past. Many of promising research programs were scaled down or shelved. We were faced with a massive brain drain of scientific personnel and the loss of continuity of generations and authoritative scientific schools. Today it is encouraging to note that the status quo gradually but still changing for the better.

Tatarstan is one of the regions in Russia that were first to start implementing the course on the development of innovative economy based on science, education and culture.

According to the Strategy for science and innovation at the present stage the main purpose of the academic sector in the Republic of Tatarstan is “organizing and conducting targeted basic and applied research to accelerate sustainable socio-economic, spiritual and technological development of Tatarstan”.

The primary tasks of Tatarstan Academy of Sciences in the Charter of the Academy are the following:

- Participation in the innovation and creating an innovative environment for the effective transfer of academic research results to the domestic and global markets of knowledge and technology;

- Preparation of highly qualified scientific personnel, including through postgraduate and doctoral research institutions of TAS, execution of activities aimed at identifying and supporting talented researchers;

- Participation in the popularization and promotion of science, scientific knowledge and scientific and technological achievements.

On the programs of basic and applied research and training Tatarstan Academy of Sciences cooperates with Russian Academy of Sciences, with its science center in Kazan, with state sectoral academies of Russia. Acting as the research coordinator in the republic the Academy carries out basic and applied research on a competitive basis in collaboration with universities and applied research institutions within their own research work schedules and national development projects in priority areas of science in the Republic of Tatarstan. This is a fundamental factor of the upsurge in innovation to a new level of the large production results of industry-scale.

During more than 15 years Tatarstan Academy of Sciences specifies the canons of scientific creativity, promotes honesty, openness, continuity and promptness in constant renovation. I am sure while maintaining its spirit and traditions the Academy will keep up to date and make a significant contribution to the development of our republic and the country.

For over two centuries the capital of Tatarstan – Kazan is one of the leading scientific centers of Eastern Europe. Thanks to the valuable contribution of N.Lobachevsky, N.Zinin, A.Butlerov, B.Arbuzov, V.Engelgardt, E.Zavoiskiy, K.Fuchs, A.Baudouin de Courtenay, V.Radlov, Sh.Mardzhani, Q.Nasyri and others by 1917 Kazan became the third most important scientific center of Russia (after Moscow and St. Petersburg). Their names and discoveries take a significant place in the history of the world science.

During the Soviet period our scholars proved the high status, they formed a powerful research base on many fields of knowledge. It is no coincidence that during the war years the USSR Academy of Sciences was evacuated to Kazan. In spite of the complicated wartime it worked for the welfare of the country successfully. Considerable scientific potential of the country was concentrated in Kazan: there were 33 scientific institutions of the USSR Academy of Sciences about 2 thousand researchers 85 Fellows and corresponding members. In 1945 there was established the Kazan Branch of the USSR Academy of Sciences that favored to founding of many trade scientific institutions that served the enormous military-industrial complex of the country aerospace and machine-building productions. Many outstanding scientists like B.Arbuzov, G.Kamay, H.Mushtari, R.Sagdeev, K.Valiev, P.Kirpichnikov became famous all over the country. Others devoted themselves to studying the national literature and history, such as Kh.Yarmi, M.Gainullin, G.Khalit, A.Khalikov.

A definite step in the history of academic science in Tatarstan was the creation of the Academic Center at the People's Commissariat of Tatarstan in the late 1920's. It lasted until 1931 and played a major role in coordinating the research, in the establishment of scientific institutions and societies in the publication of monographs, textbooks, scientific journals, in attracting outstanding scientists from Moscow and Leningrad for training the scientific personnel of the republic.

Tatarstan Academy of Sciences was established by the Decree of the President of the Republic of Tatarstan Mintimer Shaimiev № УП-138 in September 30, 1991 “to ensure a high level of development of basic sciences in the republic, strengthen their role in solving urgent problems of material and spiritual culture, national economy, coordination of research conducted at academic and industrial institutes and universities”. The first president of TAS was the academician M.Kh.Khasanov and since 2006 the academician A.M.Mazgarov has been occupying the post.

Over the years of its existence Tatarstan Academy of Sciences has become the leader of the scientific community of the republic. Currently the Academy consists of seven divisions, which bring together scientists of the humanities, biological and medical, agricultural, socio-economic and legal sciences, mathematicians, mechanics, engineers, physicists, power men, representatives of earth sciences and chemistry. Ulyanovsk regional office was established under Tatarstan Academy of Sciences at the initiative of the scientific community of Ulyanovsk region. The integration is aimed at strengthening and effective use of scientific and technological capacities of the two neighboring regions in order to accelerate the solution of actual problems in the sphere of economy, science, education, culture and create favorable conditions for the harmonious development of all peoples living in the region. 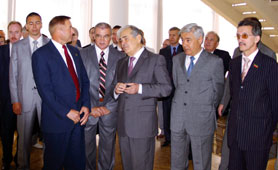 The membership of the Academy is represented by 38 full members and 75 corresponding members, 27 honorary and 8 foreign members (as of January 1, 2011). Research activities are carried out in 34 research institutes, centers and laboratories. The structure of the Academy of Sciences includes such institutions as the G.Ibragimov Institute of Language, Literature and Art,

Sh.Marjani Institute of History, Institute of Tatar Encyclopedia, Institute of Ecology and Subsoil, Institute of Informatics, Institute of Applied Semiotics, Center for Advanced Economic Research and others. Total number of staff members in the institutions of Tatarstan Academy of Sciences is more than 800 people.

- Council on integration of technical and medical sciences;

- Council on safety of the population and the teriitory.

Science of Tatarstan is an organic part of Russian and the world science. Scientists of our republic made a worthy contribution to the global research process. Creative contacts and cooperation agreements are carried out with scientific institutions from more than 40 foreign countries and several regions of Russia.