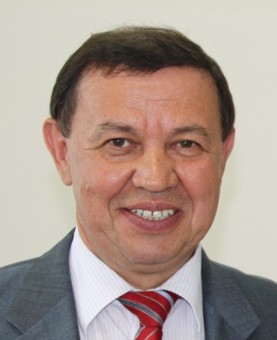 President of Tatarstan Academy of Sciences

Salakhov M. Kh. was born in 1951. TAS Fellow (2004), Doctor of Physical and Mathematical Sciences. He is the Honored Scientist of the Republic of Tatarstan and Russian Federation.

He graduated #1 Ulyanovsk Secondary School with golden medal in 1968. In the same year he entered to the Physics Faculty of Kazan State University, which he graduated with honor in 1973. As a student and postgraduate student he had received a Lenin Scholarship. In January of 1977 Salakhov defended his candidate thesis On the Problem of Atomic Spectroscopy and Plasma Diagnostics. In 1976 he began to work at the Department of Optics and Spectroscopy (since 2006 - Department of Optics and Nanophotonics): junior researcher, senior researcher, associate professor, professor (1993), Head of the Department (since 1991). In 1992 he defended his thesis and became the Doctor of Physical and Mathematical Sciences.

Prof. Salakhov is head of one of the most successful scientific direction in the KFU – “Physics of Atoms and Molecules”. Since 2006 his scientific school "The Interaction of Atoms and Molecules with Radiation and Quantum Electrodynamics Effects in the Emission Spectra of Atomic Systems" is invariably the winner of the leading scientific schools competition on priority development of science, technology and engineering in the Russian Federation.

Prof. Salakhov was the initiator of the creation of a new scientific direction for KSU associated with the development of nanophotonics.

Prof. Salakhov has given lectures and reports in many countries; he has published more than 350 scientific works, 3 monographs and 80 teaching aids; under his supervision 12 candidate and 3 doctoral dissertations were defended. In 2004 he was elected as a Fellow of Tatarstan Academy of Sciences; he is TAS Presidium Member. Prof. Salakhov is the Laureate of the State Prize of the Republic of Tatarstan in the field of Science and Technique for 2010.

Since 1997 under his guidance annually organized International Youth Scientific School “The Coherent Optics and Optical Spectroscopy”. He is the head of the Master Program on “Physics of Atoms and Molecules”. Since 1996 Prof. Salakhov is Chairman of the Specialized Council for Doctoral Theses on “Optics” and a Member of the Dissertation Council on specialty 05.13.18 Mathematical Modeling, Numerical Methods and Complexes of Programs.

During his rectorship there have been positive developments in all areas of activity of the university. In preparation for the celebration of the 200th anniversary of the university in a short time has been modernized logistic and instrumentation laboratory facilities, reconstructed the most of the buildings of the architectural ensemble, built east wing of the main building, which resulted in this unique architectural monument in accordance with the original purpose of XIX century famous architects

As rector of KSU Prof. Salakhov paid special attention to the social sphere. Since 2004 about one hundred and fifty employees improved their housing conditions, annually increases the volume of funds allocated for social support of workers and students, sports camps and lodges has been upgraded.

Under his direct supervision was carried out the work on implementation the idea of creating the federal level University on the basis of KSU and developed the Concept and Development Program of the Kazan (Volga) Federal University.

At the Meeting of the Academic Council of Kazan (Volga) Federal University Prof. Salakhov was elected as the President of KFU in May 27 of 2010.